For 45 years, The National Association of Black Owned Broadcasters has held the prestigious NABOB Awards during the organization’s Fall Management Conference. In 2021, the esteemed tradition continued as a hybrid event recognizing key figures within media, policy, and advertising who have been instrumental in helping to further NABOB’s mission, reach, and impact.

Recipients of the NABOB & Power of Urban Radio Awards are selected based on their public service and their support of diversity and inclusion. The awards recognition includes the presentations of the NABOB National Service Award and the Mickey Leland Public Service Award. Previous honorees include Attorney General Eric Holder, award winning journalist, April Ryan, civil rights activist and comedian Dick Gregory, Edna Kane-Williams of AARP and Marc Pritchard of P&G to name a few.

On-air personalities Frank Ski and Nina Brown of “The Frank Ski Show with Nina Brown” hosted the 2021 NABOB & Power of Urban Radio Awards from a live studio at the MGM National Harbor Resort, just outside of DC on Friday, October 15th marking the concluding day of the 2021 By Black Conference in partnership with the U.S. Black Chambers, Inc (USBC). Alfred Liggins, CEO of Urban One, and Karen Slade, Vice President & General Manager KJLH and NABOB Board Member appeared virtually to present the distinguished awards.

Virtual attendees tuned in on the live stream and texted their support for the 2021 honoree lineup which included National Service Award recipient Doug Ray, Global Chief Product Officer, dentsu International. Doug Ray is recognized throughout the industry for his transformative work in the development of More Than That with Gia Peppers, the first-of-its-kind audio series exclusively created and distributed by Black-owned partners.

Created in collaboration with One Solution, an award-winning division of Urban One, Doug Ray and dentsu launched More Than That with Gia Peppers out of a desire to not only respond to the inequities in the advertising supply chain, but also to provide an opportunity for dentsu clients to leverage a new consumer engagement model — one that avoids the intrusiveness of traditional advertising by co-creating and supporting content people care about.

General Motors, Procter & Gamble, and Kroger each played a major part in the development and creation of this series—allowing each organization to share their own commitments and actions they are taking to create change. 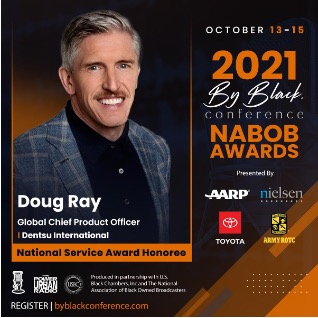 The National Association of Black-Owned Broadcasters (NABOB) and several member CEOs lent their support and provided guidance to ensure everything about the series was authentic and meaningful for sustained im“It’s not often I get the opportunity to do something that has the potential to have a sustainable impact on our industry. It was the passion and purposeful intention of many at dentsu to launch this show, which introduced a new model to authentically connect brands with the Black community – and we’re thrilled it is resonating with so many. It’s time for agencies to take more accountability in economic empowerment. We can do good and drive growth at the same time. Thank you NABOB for believing in us and helping us achieve our vision for change. It’s an honor and I’m humbled to be in the company of such extraordinary past recipients.“ -Doug Ray 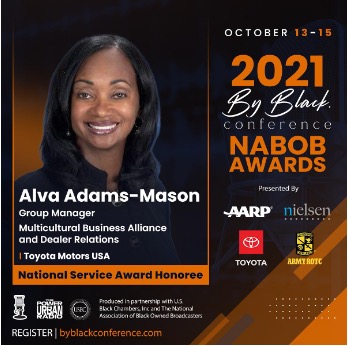 When I consider the importance of Black-Owned Broadcasters and how much their communities depend on them, I am reminded that it is imperative we champion their cause. In my role with Toyota Motors North America, I am blessed to be able to direct funding and support to great organizations, such as NABOB. I am truly honored to be recognized along with other recipients for this award.” 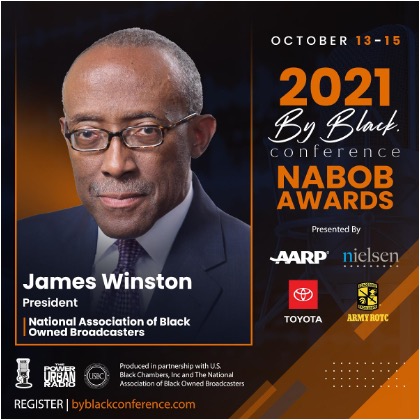 NABOB President James Winston presented Congressman G.K. Butterfield with the illustrious Mickey Leland Public Service Award. President Winston recognized Congressman Butterfield’s advocacy in Congress for increasing ownership of broadcast stations by black people and commended the Congressman for the reintroduction of H.R. 4871, the Expanding Broadcast Opportunities Act of 2021. The bill will promote diversity of ownership in the broadcast industry by reestablishing the Minority Tax Certificate Program at the Federal Communications Commission (FCC). 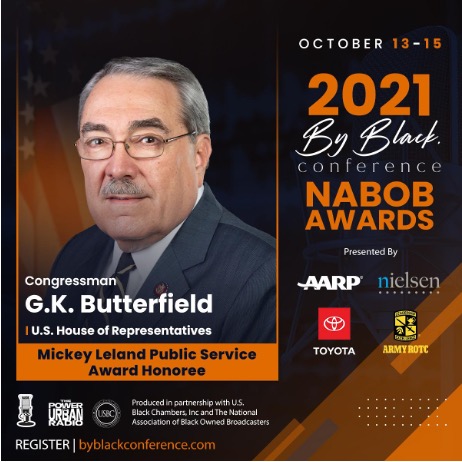 I am honored to receive the prestigious Mickey Leland Public Service Award. My sincerest appreciation goes to the National Association of Black Owned Broadcasters for this award and for highlighting my contributions in our fight to increase ownership and representation of minorities in the broadcasting community,” said Congressman G. K. Butterfield. “I am privileged to join an esteemed list of individuals that have previously received this honor. I look forward to continuing the work towards creating a space for our community to thrive in broadcasting, technology, and telecommunications.”

CONGRATULATIONS TO OUR 2021 NABOB & POWER OF URBAN RADIO AWARDS HONOREES!